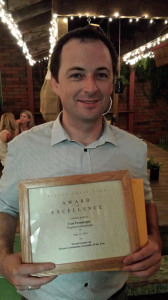 Reporter Curt Prendergast and managing editor Jonathan Clark each took home first, second and third-place awards, and Prendergast was the second runner-up for the Community Journalist of the Year. The recognitions came during a ceremony Saturday in Phoenix and were for work published during calendar year 2013.

“Curt (Prendergast) does hard-hitting stories of exceptional depth and importance, and he does them in a clear, detailed and effective manner,” contest judge Tony Bartelme, investigative reporter with The Post and Courier in Charleston, S.C., wrote in his comments for the Journalist of the Year category.

“He’s doing major-league work in a community that needs tough journalists. Well done.”
Prendergast’s first-place prize came in the Community Human-Interest Writing category, for his story “For deportees, a Christmas meal at a crossroads” about a holiday meal at the “comedor” in Nogales, Sonora, run by the Kino Border Initiative.

“Fine job of bringing readers to the heart of the scene of a challenging situation. Strong reporting and writing, with extra points for being there on Christmas morning!” wrote contest judges Jeanne Grinstead, deputy managing editor for features, and Janet K. Keeler, food and travel editor, at the Tampa Bay Times.

Prendergast finished second in the Community Immigration Reporting Category for “Immigration takes center stage,” a package of stories about three immigration-related events in two days last June in Nogales, as well as for other border reporting. He finished third in Community Investigative Reporting for what the contest judges called “his consistently sharp coverage of the local criminal justice system.”

“Clark shows a knack for juxtaposing the news in his border community with broader issues playing on the national stage in an accessible way,” wrote judges Tim Nickens and Joni James, editor and deputy editor of the Tampa Bay Times editorial board.

He also won third place in Community Business Reporting for “Business leaders see mixed results for Nogales,” a story about the anticipated local impacts of tax reform in Mexico.