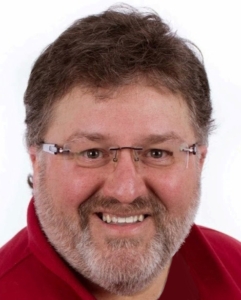 Patrick G. “Duke” Conover has been named managing editor at The Daily Herald in an announcement by Publisher Titus Workman.

“I’m pleased to have Duke assume leadership of our news team,” Workman said. “He’s a talented journalist with three decades of experience as a writer, reporter, researcher and editor.”

The 56-year-old Conover comes to The Daily Herald after serving as the regional editor for Paddock Publishing in Southern Illinois, managing the news content for five daily and seven weekly newspapers. Prior to that he was the executive editor of The Paducah Sun in Paducah, Ky., and also served as editor of the News Herald in Morganton.

Conover replaces Matt Lindberg, who was named managing editor of the Montrose Daily Press, which is owned by the same parent company, Wick Communications.

Workman said Lindberg continued and improved upon The Herald’s legacy of excellence and knows Conover will also continue to build upon the newspaper’s success.

“Duke is the perfect person to follow Matt,” Workman said. “He has a solid vision of the kinds of stories we need to publish and his keen eye for design will further enhance the look of our newspaper.”

Conover officially assumes the managing editor position on Tuesday and plans on getting to know the community quickly. He and his wife, Cathy, a retired teacher, and daughter, Linda-Catherine, 19, are in the process of moving to the Roanoke Rapids area. Aaron, their 30-year-old son, is finishing up at Miami University in Ohio after serving seven years in the Army, where he earned a Bronze Star and two Purple Hearts during three tours overseas.

Conover grew up just north of Los Angeles, in Palmdale, Calif., which is known as the heart of military aviation. Just 36 miles south of Edwards Air Force Base, the first home of “The Right Stuff” and NASA’s Space Shuttle program, Palmdale became a top location for military aircraft manufacturing.

“After high school, I did an enlistment in the Navy,” Conover said. “Before I started my first newspaper job, I took on others, such as assembling military aircraft. But, once I started newspaper reporting, I was hooked and knew I would do it for life.

“An editor told me early on in my career that if I were serious about journalism, I would go to college. It was the best advice I ever received.”

He got his degree from the University of California, Santa Barbara.

Conover said that he has lived and worked at newspapers in six states, but North Carolina has been his favorite, by far.

“I am so glad to be coming back,” he said. “With all I have read about Roanoke Rapids and Halifax County, I am thankful my family’s path has come right up to the front door of The Daily Herald.”