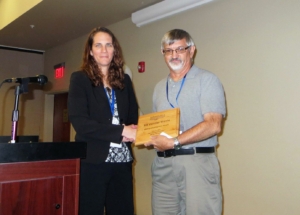 Award during the organization’s 133rd annual convention held in Billings during the weekend.

This is the first year that the Montana Newspaper Association has given out the honor that is based on service to the newspaper profession and the individual’s community involvement.

“I feel extremely honored to be recognized in this fashion by my peers in Montana,” Vander Weele said. “It’s a rewarding life to be active in a small community while working in an outstanding profession.”

Donald Lee LaBaugh, 75, of the Choteau Acantha was the other recipient of the Distinguished Service Award.

Outside of the office, he is past president of the Sidney Kiwanis Club and still serves on the club’s board of directors. He is the Kiwanis advisor for the Sidney High School Key Club and has been voted the state’s Key Club Kiwanis Advisor of the Year on two separate occasions. He is a board member for the Sidney Area Chamber of Commerce and Agriculture. He is currently on the Learning Volunteers of America’s pro-literacy board. He coached Sidney High School softball team for eight years and guided them to two state tournament berths.

Also during the weekend, Vander Weele received a second-place honor for Best Sports Feature Story for the article, “More Than a Game,” which covered Sidney’s softball team members dedicating their season to Damon McLaughlin after the coach passed away suddenly earlier in the school year.

Darla Downs, publisher of the Wolf Point Herald-News, was the recipient of the Master Editor/Publisher Award.