Herald/Review named ‘Newspaper of the Year’ by ANA

Previous Next
Herald/Review named ‘Newspaper of the Year’ by ANA 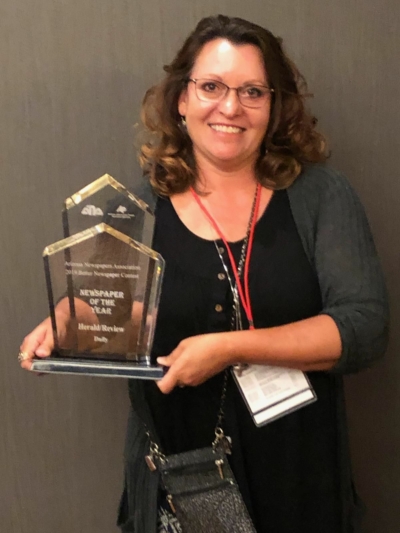 Herald/Review Publisher Jennifer Sorenson holds the Newspaper of the Year award, which was awarded to the Herald/Review on Saturday by the Arizona Newspapers Association.

Better Newspapers Contest and Excellence in Advertising Contest in Phoenix.

The Herald/Review, meanwhile, has more than 12,000 daily readers, based on website traffic, with an average of 78,000 unique visitors monthly viewing more

than 760,000 pages. A separate Newspaper of the Year award is presented to the winner among non-daily newspapers.

The Herald/Review most recently won Newspaper of the Year in 2011.

“This is a tremendous honor and a real testament to the talent of our staff and their dedication to producing high-quality, community-focused journalism,” said Managing Editor Tim Woods. “Every single person — from the reporters to the ad staff to the pressroom — is pulling in the same direction to put out a product that has an impact and matters to our readers. I’m very proud of our staff, and it’s nice to see their hard work rewarded.”

Publisher Jennifer Sorenson was on hand in Phoenix to accept the Newspaper of the Year award and other honors. Sorenson joined Herald/Review Media in July 2017 and has overseen several key changes, including an entirely new paper format, implemented in fall of 2017.

“Herald/Review Media has evolved significantly since implementing a new format two years ago. I’m extremely proud of how our entire team has embraced all the changes and challenges that has led to these awards,” Sorenson said.

“Our future is bright and, as a cohesive team, we’ll continue to focus on providing fair and balanced news and information to our readership in the format of their choice — print or digital, or both.”

The other 21 awards — 11 won by newsroom staffers and 10 by the advertising team — spanned such categories as “Best Feature Story,” “Community Service/Journalistic Achievement” and “Page Design Excellence” in the newsroom, to “Best Color Ad” and “Best Online Ad” by the advertising staff.